Pictured above: A pregnant woman receives antimalarial drugs from a nurse at the Barriere Health Center in Kenge, DRC (Credit: Karel Prinsloo / Jhpiego).

Geneva, 15 September 2021 – A preventive malaria drug is now making its way to thousands of pregnant women across Africa on bicycles and in backpacks via a network of community health workers – and it’s demonstrating how to provide protection to millions more at risk of malarial infection.

Through this network of health workers, the Unitaid-funded ‘Transforming Intermittent Preventive Treatment for Optimal Pregnancy’ (TIPTOP) project, led by Jhpiego, is delivering a safe, effective, and affordable treatment for preventing malaria during pregnancy to women in pilot districts in the Democratic Republic of Congo, Madagascar, Mozambique, and Nigeria.

Malaria infection in pregnancy can lead to serious complications including severe anemia in the mother, low birth weight in the newborn, and can even cause stillbirth or death.

In 2012, the World Health Organization (WHO) recommended administering at least three doses of the antimalarial drug sulfadoxine-pyrimethamine (SP) over the course of a pregnancy to significantly reduce the risk of malaria infection, in addition to using insecticide-treated mosquito nets and ensuring effective case management of malaria and anemia in pregnant women. Despite this recommendation, data showed that millions of women were still being missed.

In the areas of Africa where malaria transmission is moderate to high, and where this intervention – called Intermittent Preventive Treatment in pregnancy (IPTp) – is therefore crucial, just 34% of eligible pregnant women received at least three preventive doses of SP in 2019. While this is a vast improvement – only 2% of eligible women received IPTp as recently as in 2010 – it remains unacceptably low.

An estimated 12 million women were infected with malaria while pregnant in 2019, representing 35% of all pregnancies. 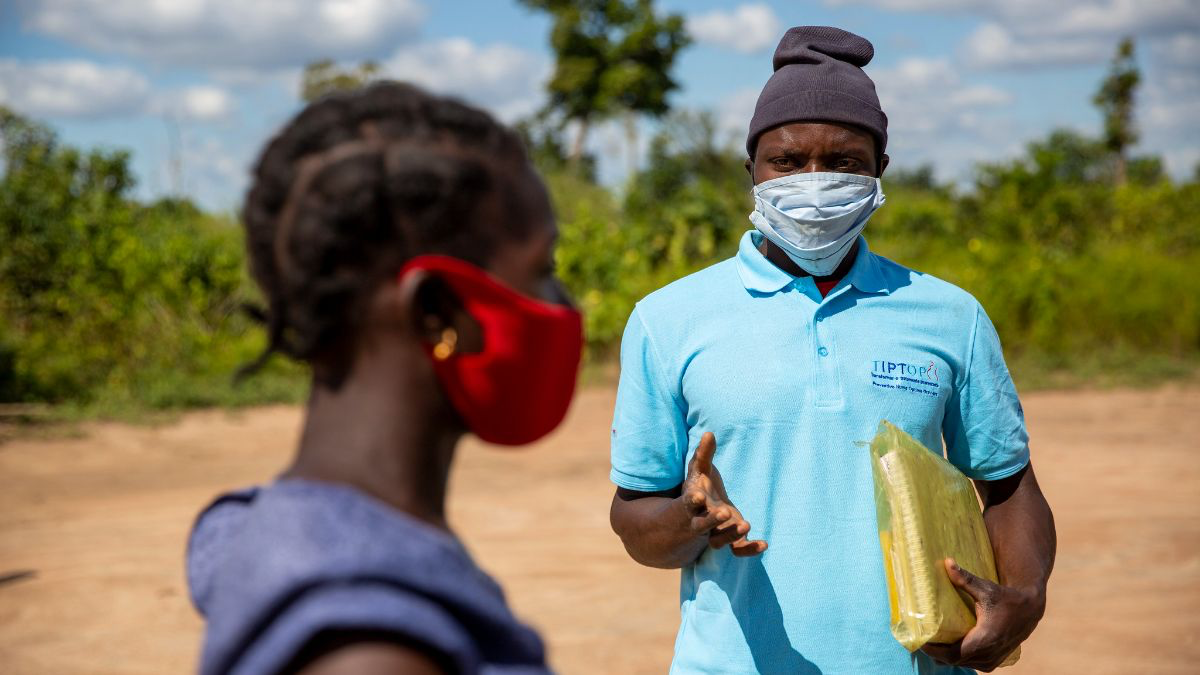 TIPTOP Community Health Worker Manual speaks to Angelina and refers her to a health center near Tica in Mozambique (Credit: Karel Prinsloo / Jhpiego).

Previous delivery methods, which relied on administering SP through antenatal care centers during routine visits were clearly not reaching widely enough. The TIPTOP project set out to determine if, by bringing malaria prevention to women in their homes via trained members of the community, it could address gaps in care and create pathways to additional health services for millions of women.

Antenatal care centers provide a range of crucial services that ensure the health and well-being of a mother and her newborn. These range from prevention of mother-to-child transmission of HIV and other sexually transmitted infections, to tuberculosis detection and treatment, nutrition, trained assistance during delivery, and much more.

TIPTOP health workers are each responsible for a specific area where they go from home to home, identifying pregnant women. Ajayi is one such community health worker who has helped dozens of woman in his area of Akure South, in Nigeria. He speaks with each pregnant women he meets and provides information on the benefits of IPTp and the antenatal care services offered through local health centers.

After providing a referral to the nearest heath facility, he remains in touch with the women over the course of their pregnancy to make sure they remember important checkups and receive the full course of malaria prevention.

“Some women come to meet me to tell me that they are pregnant, and they want me to monitor them throughout their pregnancy. Some of these women are even nurses, but they see the way I have supported other pregnant women by ensuring they take and do everything necessary to live healthy during pregnancy and they also want me to do the same for them,” says Ajayi.

Study data collected so far is showing that community delivery of IPTp has significantly increased coverage of this life-saving intervention. But the project may be having an effect that goes well beyond essential malaria prevention – while the program data shows that delivery of IPTp via community intervention is having no negative impact on access to additional health services, routine monitoring is suggesting that antenatal care visits may even be on the rise. 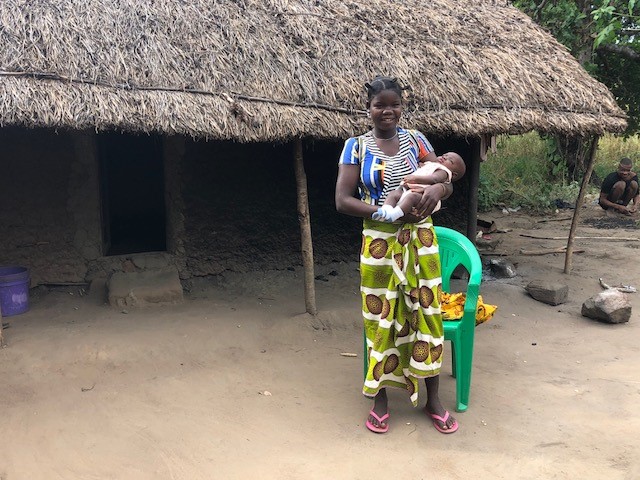 Diolista holds her healthy baby boy after a safe pregnancy, thanks in part to the three recommended doses of SP received from her TIPTOP community health worker (Credit: André Lamina / Jhpiego).

Diolista was pregnant for the fourth time when she met a TIPTOP community health worker out in her community of Maririmo in Mozambique.

Diolista, who had experienced hemorrhaging after giving birth to her first three children at home, was pleased to deliver a healthy baby boy at a health facility for the first time in her life. Over the course of her pregnancy, she received comprehensive antenatal care and three doses of malaria prevention, which helped ensure the positive outcome.

“In December, the TIPTOP worker came to my house, introduced himself, and asked me if I was in good health. When I told him I was just pregnant, he asked me if I had started the prenatal consultation and I explained to him that I had not because the pregnancy was in an early stage. He then advised me to go to the nearest health facility for an antenatal visit and explained the benefits of starting the visits early. He gave me a referral form to present at the Nacavala facility where I started the antenatal consultations and took my first dose of SP,” she says.

The TIPTOP project has protected nearly 100,000 pregnant women from malaria by providing at least three doses of SP through community interventions. In 2021, the project is already reaching over 80% of pregnant women in TIPTOP districts – demonstrating a model that could bring countries closer to reaching the WHO’s targets for 80% IPTp coverage. 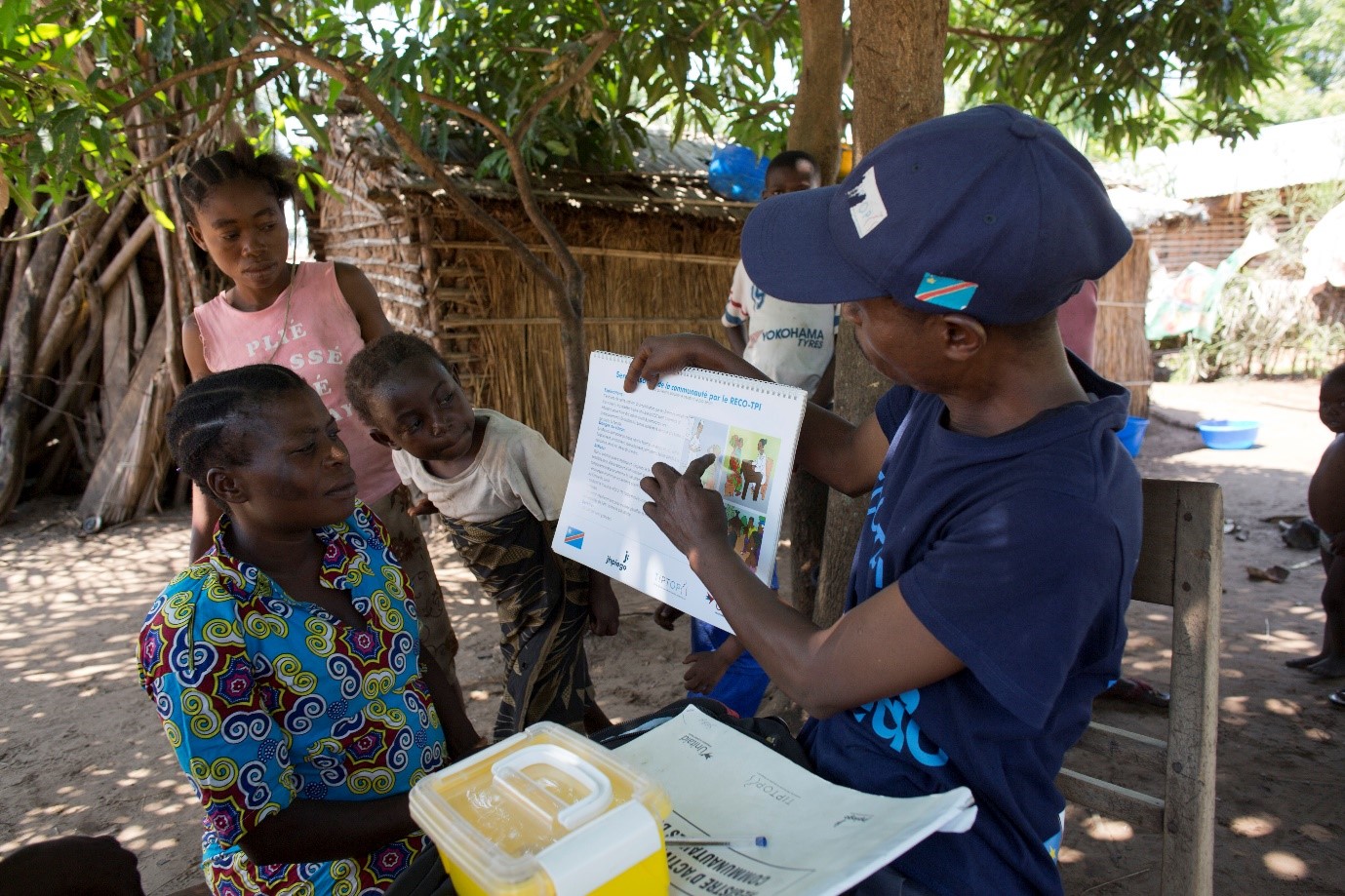 The project owes its success in part to its agility in responding to challenges. When teams in the Kenge district of the Democratic Republic of Congo analyzed the data collected by health workers, they confirmed that, while many women were receiving SP through community interventions, the number of women coming for antenatal care remained low.

Realizing that the clinics were too far for many women to access easily, they quickly adapted to bring midwives to the communities, setting up antenatal care outreach sites and working with community workers to connect women with the services.

“We thought we were abandoned by the health care providers, but today it is a great joy to see them among us,” commented one woman at the Mikunzi health outpost, where she had come for care. “If this had started a long time ago, many of us would not have had to give birth at home and lose their lives or their babies.” 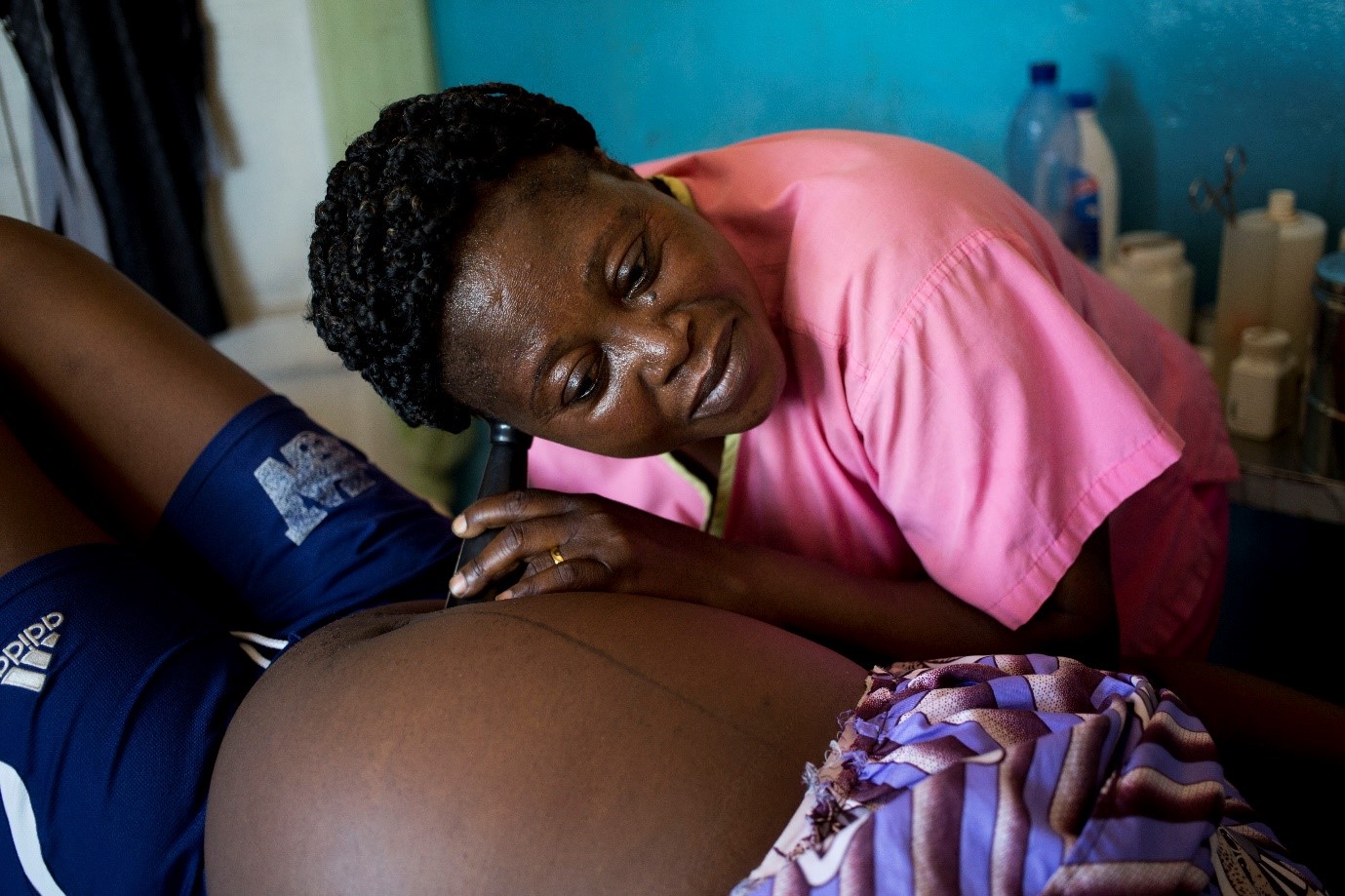 This adaptable community-led approach has proven effective in an unexpected way too – when COVID-19 shuttered local clinics and created barriers to healthcare across the world, the TIPTOP team moved quickly to ensure continuity of essential health services.

Using virtual trainings and messaging platforms, the project was able to provide community healthcare workers and civil society organizations with messaging and information to generate continued demand for IPTp, while also helping women feel protected from the threat of COVID-19 during their pregnancy.

“Now, as we are nearing the end of the TIPTOP project, evidence is showing nearly all project districts are already reaching or exceeding our targets of 50% of eligible pregnant women receiving three doses of IPTp. We’re delighted to see these community-led approaches making a difference in the lives of thousands of pregnant women. Beyond achieving targets, TIPTOP has underscored the critical role community health workers play in supporting the health of women, where they live.  This offers promise and opportunity well beyond life of project; providing a sustainable and trustworthy pathway to improve the health of women across a range of challenges,” said Elaine Roman, TIPTOP Project Director.

“We’ve known that IPTp is effective in preventing malaria during pregnancy for years, but we simply have not succeeded in reaching enough women at risk. That’s why these community-led interventions have such strong potential in bridging the gap to health services and helping bring essential malaria protection to women,” said Dr Philippe Duneton, Executive Director of Unitaid.

The TIPTOP project is generating valuable evidence to demonstrate the effectiveness of community delivery for IPTp for review by the WHO which, if positive, will provide a model for reaching millions of women at-risk of malaria across Africa.

The success of TIPTOP’s IPTp coverage paves the way for a new major investment from Unitaid, which builds on lessons learned and best practices from TIPTOP to reach people where they live. The new project, led by Population Services International (PSI) will extend malaria prevention using SP to children under two years old, who are among the most vulnerable to infection. SP is also effective in averting malaria and anemia in babies, yet despite Intermittent Preventive Treatment in infants (IPTi) being recommended by the WHO for use since 2010, it has not been implemented wide scale in Africa.

“We’re pleased to see the success the TIPTOP project is achieving by crafting delivery methods that are best suited to the needs of the populations we are trying to reach. Unitaid is pleased to announce a complementary new initiative, led by PSI, that will similarly determine how to most effectively reach children under two with life-saving protection from malaria by working with countries to co-design the most effective solutions,” said Dr Duneton.

The IPTi+ project will develop scalable models of IPTi+ – an innovation on the WHO-recommended IPTi that expands the number of preventive doses of SP administered to children and extends coverage through a child’s second year of life. The project will generate evidence to support widespread adoption of this effective but underutilized prevention method that, when implemented at scale, could avert 6.7 million cases of malaria and anemia in children under two by 2030.

About Unitaid
Unitaid is a global health agency engaged in finding innovative solutions to prevent, diagnose, and treat diseases more quickly, cheaply, and effectively, in low- and middle-income countries. Its work includes funding initiatives to address major diseases such as HIV/AIDS, malaria, and tuberculosis, as well as HIV co-infections and co-morbidities such as cervical cancer and hepatitis C, and cross-cutting areas, such as fever management. Unitaid is now applying its expertise to address challenges in advancing new therapies and diagnostics for the COVID-19 pandemic, serving as a key member of the Access to COVID-19 Tools (ACT) Accelerator. Unitaid is hosted by the World Health Organization.